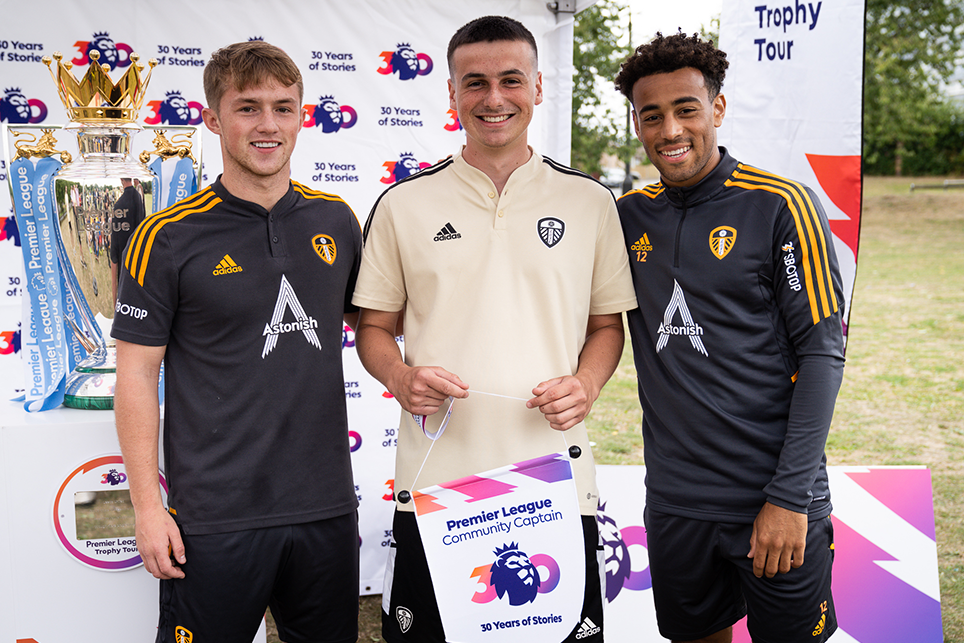 Brooklyn Nixon has been named as Leeds United‘s Community Captain in recognition of his fantastic work in the local area, specifically through the Premier League Kicks programme.

The 18-year-old Leeds United Foundation coach received the accolade at a special PL Kicks session where he was awarded a PL30 Community Captain armband and pennant by first-team duo Tyler Adams and Joe Gelhardt.

A plaque engraved with Brooklyn’s name was also added to the Premier League Trophy plinth.

“It’s massively rewarding doing this job, I go home every single day with a smile on my face from sessions like this because when you see this many people, all enjoying their football and they all go home buzzing, there’s no better feeling.”

Adams and Gelhardt met Brooklyn to learn about his journey through the PL Kicks programme and take part in one of his sessions, along with around 30 young participants.

Following the presentation, the Leeds duo spoke with the young people about life as a footballer, adapting to new cultures and how important it is for different communities to blend.

“It has been fantastic to see the journey that Brooklyn has been on since he started with us.”

“To come down here and be that person that people aspire to be and be a role model for them is very important to me,” Adams said. “The community is what makes Leeds special, without the community we wouldn’t have the fanbase that we do.”

Community Captains are being nominated across the country as part of the Premier League’s 30th anniversary celebrations.

“It has been fantastic to see the journey that Brooklyn has been on since he started with us, from being a participant, to volunteering, taking on an apprenticeship and now being a full-time coach with us and leading his own sessions,” said Richard Foye, who runs PL Kicks for the Foundation.

“Brooklyn has excelled with his work engaging refugees into our PL Kicks provision, he has embedded regular youth voice discussions at sessions, and empowered our participants – providing a sense of belonging and value to ensure they know that their contributions matter, and he continues to find ways to break down barriers to allow as many people to participate in sessions as possible.”

Aussie Rules is BACK!